After the performance on the 12th of April, after-talk with Eun-Me Ahn

On tour with the support of: KAMS – Center Stageg Korea

Recently, both Koreas made a historical step that could put an end to a conflict that has lasted for over 65 years. About North Korea, one most of all knows its capricious leader and his race to atomic weapon. But what about arts and dance in the «hermit country»?

If it is very difficult, if not impossible, for a South Korean artist to cross the border without the government permission, the internet is full of videos coming from the North: military parades and fan dances, gestures showing off virility and virtuoso acrobatics, traditional dances and village dances.

Using this material, Eun-Me Ahn makes the movements and the codes her own and cooks them adding her usual colourful and spicy twist and going from minimalistic to epic scenes, to explore differences and similarities between dance in the North and the South: « For a long time, relationships between North and South Korea have been extremely tensed, but things have recently improved. Then I realized I almost knew nothing about North Korea and the dance they do there.

Yet, with North Koreans, we share the same roots, the same traditions, but because of History and the partition of Korea, dance has evolved very differently on each side of the border. As a choreographer, I have a pure urge to know how movement has developed for over 60 years within a completely different ideology. Of course, there are some obvious differences, but probably also some common things to North and South dance. All citizens are hoping for peace between the two countries. Maybe now is time to try to know each other a little better. »

Ah, the famous custard pie that is the confrontation “between tradition and modernity” …

How many creators have struggled to find the way to describe what is finally the lot of every artist: on the one hand to know, understand, integrate what the ancients did; on the other to forgot them, overcome them and hope to find something new. Quite a vast program…

On this level, Eun-Me Ahn that France discovered in 2013 and 2014 thanks to Festival Paris Quartier d’Eté, has found new, unexpected and exciting ways. This comes first from her own itinerary, marked as much by the learning and exploration of shamanic traditions as by the many years spent in New York or a profound friendship with the missed Pina Bausch (who invited her many times in Wuppertal). Korean and cosmopolitan, figure of the avant-garde but also choreographer of the very official opening ceremony of the FIFA World Cup in Daegu in 2002 and presented in the most important international festivals, she knows how to improve the beauties of contrast, mix polka dots, stripes and flowers, how to play with the most pop colours before switching to the most solemn austerity, how to play with the most subtle shades of androgyny, or use slowness to make trance rhythm burst…

Educated at the school of rigor, precise, demanding and of an all-Korean discipline, Eun-Me Ahn is also a daredevil performer, ready for all kind of piracies. One has seen her jump from the top of a crane, then attack a piano with axe and scissors, rip off herself her fairy dress made of white ties to distribute the pieces to the audiences while performing a teddy bear dance, bury herself with a clown costume under a rain of balloons, locked up behind bars in a duet with a chicken, or dressed up as a mushroom… But one would be wrong thinking it is provocation. It is rather the affirmation of a curiosity and a freedom held by work and style pushed to their most unexpected limits. 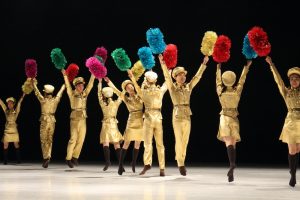 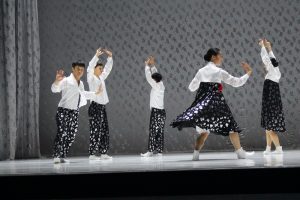 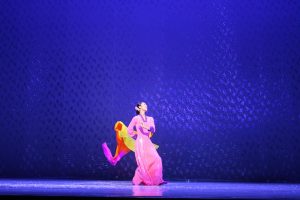 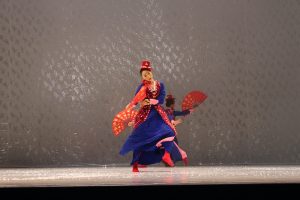 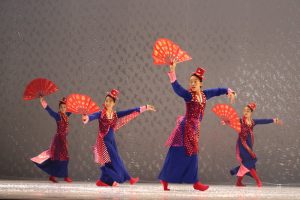 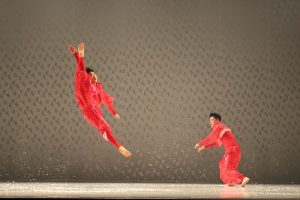 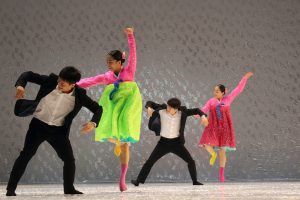 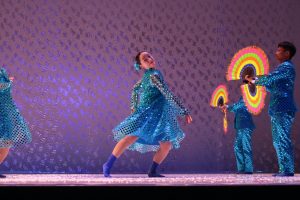 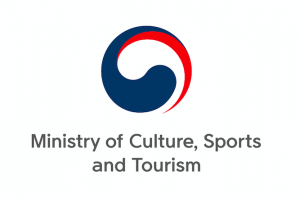 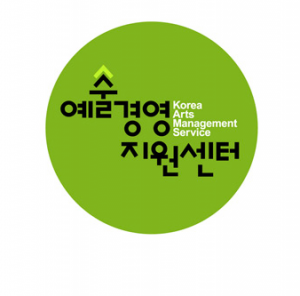